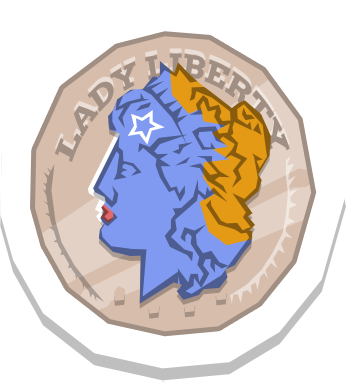 Guess which word appears the most in the Constitution? Did you say, "democracy," "freedom," "liberties?" WRONG! It's the word, "the!" Bet you can't talk about your favorite thing without saying the word "the."

James Madison, the "Father of the Constitution" is on the $5,000 bill! Yes, there really is a $5,000 bill and if you ever get one, you HAVE to share with your siblings.

Have you ever wondered why it is called "The Bill of Rights?" A bill can also mean "list," so this is a list of rights. Don't worry; you don't have to pay this bill to have the rights listed. Let's face it, you probably don't have money, anyway.

The Constitution is 226 years old and there have been only 27 changes to it! Maybe the 28th change should be a law that makes summers longer. Keep dreaming!

Laws cannot violate the the Constitution. What you just read is true, but did you see the mistake in that sentence?? Pay attention.

Schools can restrict your rights because of "in loco parentis!" Crazy parents? No – in loco parentis means that when you are in school, the school is your parent! I take that back, that IS crazy parenting.

The Constitution created a federal government made up of three parts to make sure that we never have a king or queen ruling the United States. Forget your dreams about being a prince or princess: Not Gonna Happen in the U.S. of A.

Benjamin Franklin and George Washington were famous. Not like ONE DIRECTION famous, more like Obama famous; you scream for One Direction, but you do not scream for Obama. You just don't.

There are a lot of spelling mistakes on the Constitution. Well, actually, there are not as many mistakes as people think; back then, people used both British and American spellings all the time. Words that people think are misspelled today were just spelled differently back in those days. For example, PENSYLVANIA above the signers’ name had more than one spelling and is spelled with one N, just like it is on the Liberty Bell.

Jacob Shallus was paid $30 for handwriting over 4000 words in the Constitution in two days; that's less than half of one penny for each word and two days of writing. That’s probably why he wrote a paragraph listing all the words he had misspelled instead of starting all over. Don’t try that on your next book report.

What would you say if I told you that the youngest person to sign the Constitution was the same age as YOU? Wouldn't that be amazing? Well, the youngest person wasn't your age. He was actually 26. In fact, there's no way I would really know your age!

Luckily for you, you don’t lose all of your rights in school. School is where wonderful ideas can come from; that's your protected free speech rights. Remember how lucky you are the next time you have to listen to Billy’s crazy idea about teaching his pet gerbil how to talk.

If you could ask one of the Framers who spent 4 months working on the Constitution a question, what would you ask? My guess would be, "aren't you over 250 years old?"

The Framers wrote the Constitution over 4 very hot months in Philadelphia. They wore wigs, tights, and several layers of clothes. Everyone overdressed in those days. They must have really like sweating.

Guess what? He's powerful, but the President always has to work on a team with Congress and the Supreme Court to run the country. This is a system of "checks and balances" so that no part of the government is too powerful. That is one never-ending team project though.

The Constitution guarantees that everyone has rights, but some rights have to be restricted just a little. Think about this: You are in the middle of math class. Suddenly, the class clown, who wants to disrupt the lesson, yells, "Justin Bieber is outside". Can you imagine what would happen? The student does have the right to free speech, but cannot deliberately do things that stop the learning process. Would you have stayed in class?

The way you can control the government is by voting for the people you want to represent you. If your candidate wins, the government might run the way you want it to. What would you do if you could vote for your principal? What about your siblings or your parents?